Lab Notes: a blog by Trials.ai

The Past and Future of Clinical Trials - Part IV 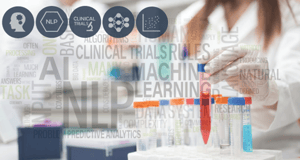 At last year’s Healthcare Information and Management Systems Society conference (HIMSS 2018), Mayo Clinic announced that it increased enrollment by 80% by using IBM’s Watson AI platform for breast cancer. Dr. Kyu Rhee, chief health officer at Watson Heath, further stated, “Watson for clinical trial matching understands key patient attributes and how to identify them in a variety of formats…to effectively evaluate a patient against the inclusion or exclusion criteria for a trial.” This is clearly a very specific example related to a very particular type of trial, using a commercial closed platform, and with no guarantee that the results can be repeated in other trials with different patient’s requirements and sample size restrictions. Yet, the idea that AI can be used to increase enrollment is very exciting. Enrollment has always been a challenge in clinical trials, and if AI is effective in making an impact there, it compels us to ask: where else can AI be used to improve clinical trials?

The Past and Future of Clinical Trials - Part III 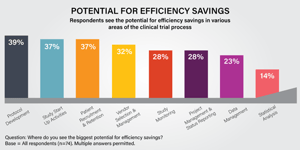 Where can AI impact the clinical trials process directly? Application areas include increasing trial efficiency through better protocol design, patient enrollment and retention, and study start-up, which were each named as prime candidates for improvement by nearly 40% of sponsors in a recent ICON-Pharma Intelligence survey. With clinical trials accounting for 40% of pharma research budgets, sponsors need new ways to accelerate timelines and reduce costs. Joseph Scheeren, senior advisor for R&D at Bayer, estimates that AI can cut 30-40% of the time required for a clinical trial: “In R&D, speed is everything.”

The Past and Future of Clinical Trials - Part II 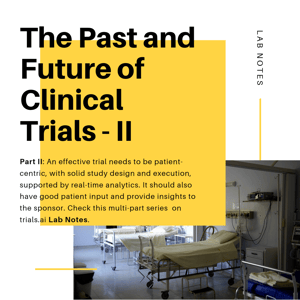 An effective trial needs to be patient-centric, with solid study design and execution, supported by real-time analytics. It should also have good patient input and provide insights to the sponsor.

The Past and Future of Clinical Trials - Part I 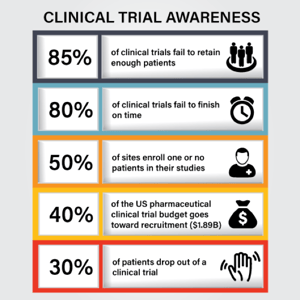 Today is a very important day on our calendar – it’s International Clinical Trials Day, May the 20th. Dr. James Lind is recognized as the first physician to have conducted a controlled clinical trial in the modern era. Lind was a Scottish naval surgeon and worked on British Royal Navy ships in the 16th century. He noticed the high mortality of scurvy among the sailors and planned a comparative trial of the most promising cure for this ailment. The date he conducted this trial was May 20th, 1747.

Clinical trials have come a long way since Lind’s search for a cure for scurvy. But we still have a long way to go. Let’s start with a sobering statistic: Of all the drugs started in clinical trials on humans, only 10 percent secure approval. Not only that, roughly only 1 in every 5,000 compounds that drug companies discover and put through preclinical testing ultimately becomes an approved drug. These statistics are about drugs, but that is not the only scope for clinical trials. Clinical trials are designed to answer specific questions about new treatments, such as novel vaccines, drugs, but they also focus on new dietary choices, dietary supplements, and medical devices. So the impact of failed clinical trials is enormous—not only because it comes at a huge financial loss, but even more because it implies a direct loss of human lives—by not allowing lifesaving drugs, procedures, and medical devices to be available in time.

Why are clinical trials so prone to failure? There are many reasons.

A significant number of clinical trials fail every year because of inadequate financial support, poor protocol designs, an inability to recruit the right patients, and a lack of good software tools to conduct the trial, among other reasons. By consequence, lifesaving drugs, innovative devices, and great research fail to reach the patients who need help desperately.

Are you a clinical trials professional?

Want to learn about how Ai is improving clinical trials?

Trials.ai is on a mission to bring treatments to patients faster, because they don't have time to wait. This 'blog' will provide insights into our company as well as research that supports methods that can improve clinical trial outcomes.

Made with cool in San Diego